Red Fort which is also known as Lal Qila is one of the most famous historical forts in India, built by Shah Jahan. Mughal Emperors ruled on Red Fort for more than 200 years. The fifth Mughal Emperor Shah Jahan built this legendary building called Red Fort. He ordered to construct the Red Fort in the year 1639.

It is said that Shah Jahan built the Red Fort when he planned to relocate his capital from Agra to Delhi.

Ustad Ahmad Lahori was the architect who designed the Red Fort originally in red and white colors. He also designed Taj Mahal. The construction of the Red Fort took around 9 years to complete (May 1639 and April 1648).

Shah Jahan built Red Fort in 1639 as the palace of his secured capital Shahjahanabad. This fort has got this name because of its massive enclosing walls which are made of red sandstone. The royal apartments of Red Fort has a chain of pavilions which are connected by water channel (also known as Nahr-i-Bihisht). Red Fort also represents the pinnacle of Mughal creativity by Shah Jahan.

Though Shah Jahan designed and built the Red Fort as per the islamic prototype but each pavilion has the architectural fusion of Persian, Hindu and Timurid traditions. Many gardens and buildings in Delhi, Rajasthan, Kashmir and  Punjab are influenced by the design of Red Fort and its garden design.

Though, British destroyed most of the Fort’s marble structures. Moreover, British used Red Fort to put the last Mughal Emperor on trial before exiling him to Yangon in the year 1858.

Red Fort was also nominated as the UNESCO World Heritage Site in 2007.

The architect Ustad Ahmad Lahori designed the fort on the order of Shah Jahan. Red Fort is situated along the Yamuna River. The construction of the Red Fort began in the month of Muharram, on 13th May 1638 which completed on 6th April 1648. The boundary walls of the Red Fort are asymmetrical unlike other fort containing the old Salimgarh Fort. This palace was the point of convergence of Shahjahanabad (nowadays Old Delhi) in the early days.

Shah Jahan gave an order to build Red Fort in the year 1638 because he had plans to shift his capital from Agra to Delhi. Ustad Ahmad Lahauri was the architect of the Red Fort who also designed Taj Mahal. Red Fort took 10 years to complete. Later, Aurangzeb built the Pearl mosque to the Emperor’s private rooms who was also the successor of Shah Jahan. After Aurangzeb’s ruling the Fort degenerated gradually during the 18th century.

After Shah Jahan’s murder, Farrukhsiyar was the next king to rule the fort. During this period he converted the silver ceiling of the fort to copper ceiling in order to raise money.  Subsequently, the Persian Emperor Nadir Shah defeated the Mughal army and stole the goods from the Red Fort in the year 1739. He left the city after three months and then returned to Persia after destroying it badly. In the year 1978, Marathas occupied and ruled the city for nearly two decades.  The British East India Company defeated the Marathas in the Second Anglo Maratha War in the year 1803. This war ended the Maratha rule of the city and the Red Fort.

Bahadur Shah II  was the last Mughal Emperor who occupied the Fort but he failed in rebelling in the year 1858. As a result, he returned to the Red Fort as the British prisoner and exiled to Rangoon which ended the Mughal reign. The British stole the valuables from the Fort’s Palaces, destroyed the systematic designs, gardens, servant’s quarters. Though, they didn’t damage the defensive walls of the fort. Lord Curzon, Viceroy of India who ruled from 1899 to 1905 and ordered for the reconstruction and repair of the walls of the Red Fort. He also restored the garden of the Fort with watering system.

Most of the artwork of the Red Fort were robbed and stolen during the takeover of Nadir Shah and Indian Rebellion of 1857 against the British which failed. Even these were sold to the British, Victoria and Albert museums and British libraries. Example of some of the items being sold to the Britishers are:

Lahori Gate faces the Lahore city and so it is called Lahori Gate which is now the part of Pakistan. This is the main gate from where the tourists enter the Red Fort. The gate is made of red sandstone and its roof is made of white stone.

Delhi gate is similar to the Lahori Gate which is the southern entrance for visitors. The main attraction of this gate is 2 huge stone elephants facing each other on both sides of the gate. 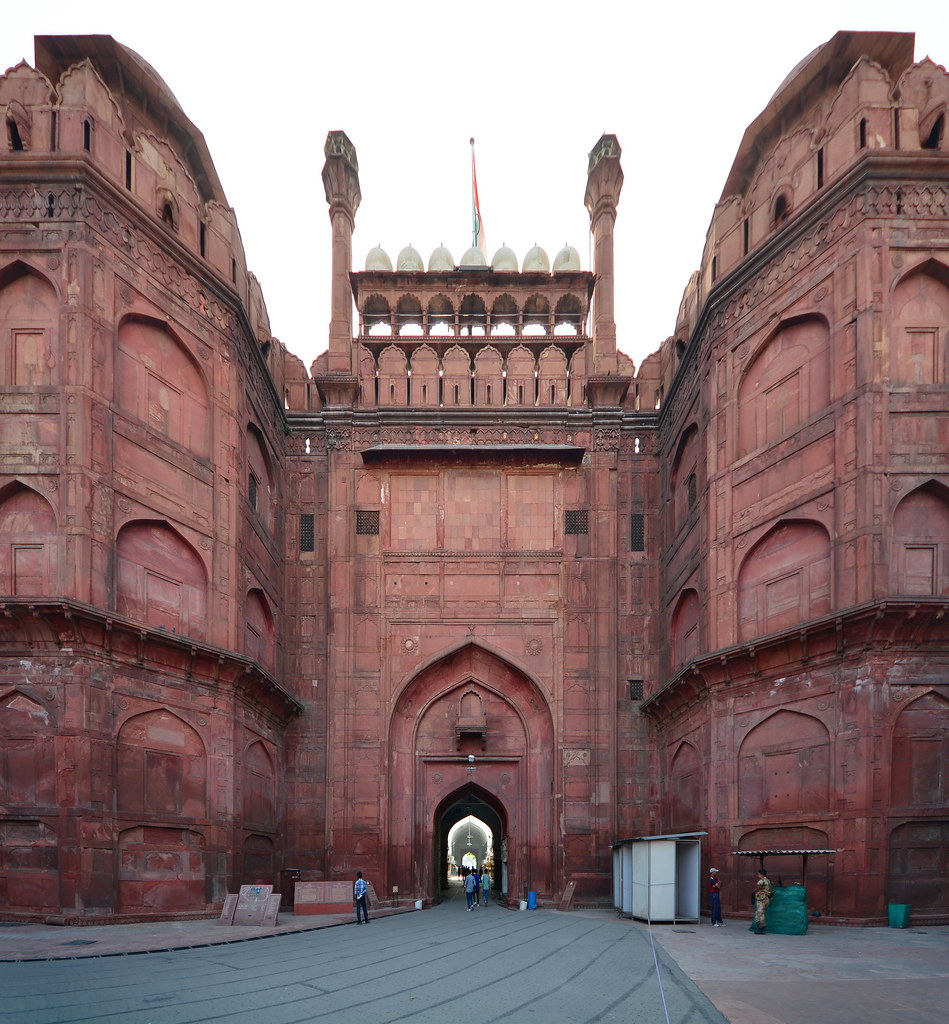 Naubat Khana which is also known as Nakkar Khana is the drum house which is located at the east side of the court and is isolated. This is the palace which the musicians were using it to play musical instruments on special occasions. The palace was also used for making the important announcement if any special or royal person arrives at the court or to make the announcement of any law to be enforced.

Indian War Memorial Museum is situated on the second floor of Naubat Khana.

This is the big hall which the Emperor was using it to listen to the public problems. The front of the hall has entrance from three sides. The hall ceiling is gold painted and wall has the lime plaster. Eastern wall has the marble canopy which is covered with Bengal roof.

The royal apartment which consists of row of pavilions built on a raised platform on the eastern edge of the fort. Yamuna river is clearly visible over the top of it. The pavilions are connecting to the canal Nahr-i-Bihisht ( meaning “Stream of Paradise”) which run through the center of each pavillion.

Diwan-i-Khas was the private hall which the Emperor was using it to meet his ministers and guests. It is made with white marble and precious stones. Initially there was silver ceiling but now the wooden ceiling has replaced the silver ceiling. Diwan-i-Khas also had a peacock throne earlier which Nadir Shah had stolen.

Mumtaz Mahal is the palace of Shah Jahan’s second wife. It faces the Yamuna river. This palace is also made of white marble. British used this Palace as prison. But now the Indian government has converted it into the museum. It has stored in beautiful artifacts from the Mughal era. 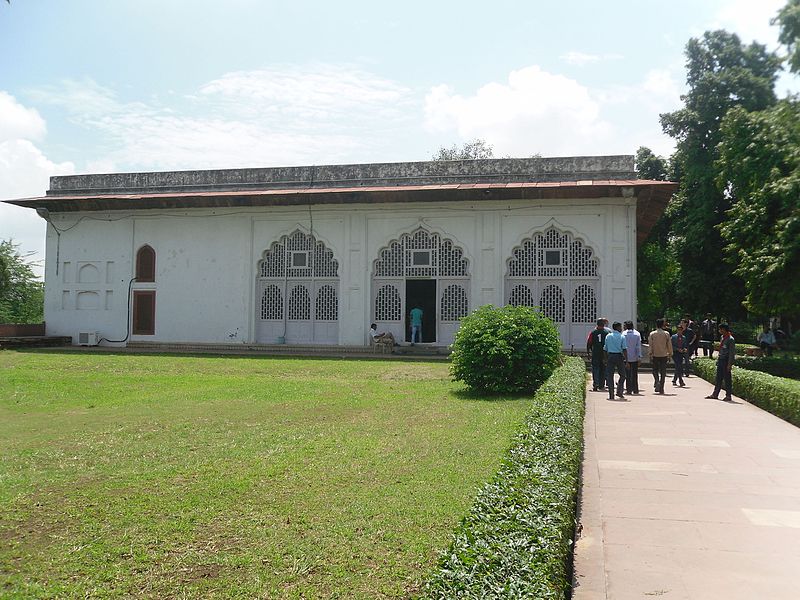 This was the private hall of the Emperor used to sit and sleep. This Palace is made of marble painted with floral color. Every morning the Emperor had to address the audience from the east of this Palace.

Bahadur Shah II designed Hira Mahal. This is the simply designed Palace which was initially called Moti Mahal. Later British destroyed it in 1857 war. Originally Hira Mahal had a chhatri at the top which Britishers damaged. Aurangzeb had also built a marble pavilion in front of it.

Bahadur Shah Zafar constructed Zafar Mahal in the year 1842. It is also made of red sandstone.

This is the place which the Emperor was using it to take Royal bath. It is located to the South of the Diwan-i-Khas which is made of white marble.

Moti Masjid is in the west of side of Hammam. It is a 3 domed mosque which has been sculpted into white marble. Aurangzeb built Moti Masjid meaning Pearl Mosque in the year 1659. This mosque is made of white marble. The Emperor was using it for prayer in the mosque.

This is the largest garden in the Fort which British destroyed in the war of 1857. It is also known as Life Bestowing Garden. Hayat Bakhsh Bagh is located in the northeast region of the Red Fort complex. It has an enlarged pond which runs through the Nahr-i-Bihisht. The pond is now dried.

Earlier small gardens like Mehtab Bagh or Moonlight Garden were there in the west of Hayat Bakhsh Bagh which now have been destroyed by the Britishers. Government has plans to restore the gardens in future.

Baoli also known as step-well is one of the monuments which is believed not to be destroyed by the Britishers after Indian Rebellion of 1857. The halls inside the Baoli were transformed into the prison.

How to reach Red Fort

The best way to reach Red Fort is the metro route. Chandni Chowk metro station is the nearest one which is at 1.5 km distance. There are plenty of auto-rickshaw and peddle rickshaw available to commute from metro station to the Fort.

There is a big ground available near the Red Fort for parking. Though you can also park your vehicle along with the roadside

Who was the architect of Red Fort?

What is the real name of Red Fort?

How many are there in Red Fort?

Who is the owner of the Red Fort now?

When was Delhi Red Fort built?

Why is Red Fort red in color?

Red Fort is red in color because of its red sandstone.

What is the nearest metro station to Red Fort?