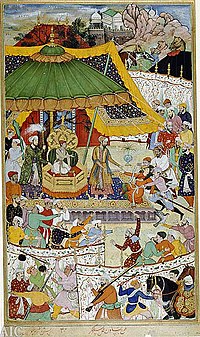 Abu’l-Fazl ibn Mubarak has written Ain-i-Akbari including Akbarnama in Persian language. It forms Volume III and the final part is the much larger  document, the Akbarnama which has also three volumes. It is now in  Hazarduari Palace (also known as Bara Kothi), India.

The Ain-i-Akbari is the third volume of the Akbarnama which has the information related to Akbar’s reign during his administrative times. Blochmann has explained that the book contains the ‘āīn’ (i.e. mode of governing) of Akbar which is in fact the administrative report and statistical return of his government. It was about 1590.

The Ain-i-Akbari is divided into five books. Manzil-abadi is the book which deals with the imperial household and its maintenance. Sipah-abadi is the second book, with the servants of the emperor, military and civil services. The third book deals with imperial administration, containing regulations for the judiciary and the executive. The fourth book has the information on Hindu philosophy, science, social customs and literature. And the fifth book contains the sayings of Akbar, along with an account of the ancestry and biography of the author.

Manzil-abadi has a total of 90 ‘Ain’ or Regulations which generally deal with different segments of administration and occupations during Akbar’s reign time. The various ain include the one on the imperial mint, its workmen and their process of refining and extracting gold and silver, the dirham and the dinar etc. There are also other portions which are dedicated to the Imperial Harem (Ain 15), the royal seals (Ain 20), the imperial kitchen (Ain 23) and its recipes and the rules relating to the days of abstinence (Ain 26). The volume contains a detailed description of the trade/business of items such as fruits, vegetables, perfumes, carpets etc. and also of art and painting. Ain-i-Akbari has very high information related to the maintenance of the Mughal army during Akbar’s reign. Ain 35 onwards has the information related to the use and maintenance of artillery, upkeep and branding of royal horses, camels, mules and elephants. It describes even the detail of the food given to animals. The volume also has the regulatory information pertaining to the wages of the  labourers, estimates of house building etc.

The second book manages the servants of the throne, the military and civil services, and the attendants at court whose literary genius or musical skill had a great deal of encouragement from the emperor.

The third volume is about the regulations of the judicial and executive departments, the establishment of a new and more practical era, the survey of the land, the tribal divisions, and the rent-roll of the finance minister.

The fourth book is about the social condition and literary activity, especially in philosophy and law, of the Hindus, who was the major part of the population, and in whose political advancement the emperor saw the guarantee of the stability of his realm. There are also a few chapters on the foreign invaders of India, on distinguished travellers, and on Muslim saints and the sects to which they belong.

The fifth book has the moral sentences and epigrammatic sayings, observations, and rules of wisdom of the emperor which were collected by Abu’l Fazl.

Sir Syed Ahmad Khan finished his scholarly, well researched and described the edition of Abul Fazl’s Ain-e- Akbari in 1855. After finishing his work to his satisfaction, he brought it to Mirza Asadullah Khan Ghalib believing that he would appreciate his labours. He approached the great Ghalib to write a taqriz (in the convention of the times, a laudatory foreword) for it. The least that could be said against it was that the book had little value even as an antique document. Ghalib practically scolded Syed Ahmad Khan for wasting his talents and time on dead things. Instead, he praised sky-high the “sahibs of England” who at that time held all the keys to all the ains in this world.

The poem  came at the time when Syed Ahmad Khan’s thought and feelings themselves were inclining toward change. Ghalib was well aware of a European [English]-sponsored change in the world polity, especially Indian polity. Syed Ahmad might was also well aware of this situation. Syed Ahmad Khan may also have felt that it would be better if he would have been informed about the English and the outside world, should have himself seen the change that now seemed to be just round the corner.

Syed Ahmad Khan the never wrote a single word in praise of the Ain-e Akbari. In  fact he gave up taking an active interest in history and archaeology. Though he edited another two historical texts over the next few years, but none of it was anything like the Ain-e Akbari, a vast and thrilled document on Akbar’s governance.

The business conducted by Akbar Majesty is versatile. A large number of men were appointed on the days assembly of expenditure was announced. Some pray his majesty to remove religious doubt, some seek his advice for settling a worldly matter, others needed medicines for their cure. Many other requests were made like these. Formerly it had been custom for man to come with horses and equipments, but the men who were appointed to the post of Ahadi were allowed to bring horses. The salary is proposed by the officer who bring them. Every Monday all such horsemen are mustered as were left from the preceding week.

According to his Majesty orders every school boy must learn to write the letters of the alphabet first and then they should learn to trace them into several forms. They had to learn the shape and name of each letter, which may be done on two days, after which the boy should proceed to write joined letter. They process worked for a week after which boy had to learn some prose and poetry by heart. Then they had to commit to memory some verses to the praise of God, or moral sentences, each written separately.