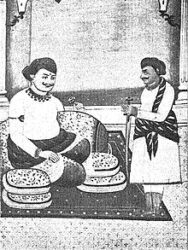 Gangadhar Rao Newalkar was a descendant of Raghunath Hari Newalkar who was the first governor of Jhansi during Maratha rule.  He was also the son of Shiv Rao Bhau and the 5th raja (king) of Jhansi in India. Rani Laxmibai was his second wife.

Gangadhar Rao ancestors hailed from Ratnagiri district of Maharashtra. Some of them moved to Khandesh during the rule of Peshwa. They served important posts in the Peshwa and Holkar armies. Raghunath Hari Newalkar strengthened Maratha polity in Bundelkhand. However as he grew old, he handed over the reins of Jhansi to his younger brother Shiv Rao Bhau.

On the death of Raghunath Rao III in 1838, the British rulers accepted his brother Gangadhar Rao as the Raja of Jhansi in 1843.

See also  Lofoten is a group of islands in Norway.

Gangadhar Rao was first married to Ramabai who died soon. In May 1842, Gangadhar Rao married Manikarnika Tambe who was renamed as Laxmibai, who later became the Queen of Jhansi and revolted against the British during the Indian Rebellion of 1857.

In September 1851, she gave birth to a boy named Damodar Rao, who died at the age of just four months after birth. Raja Gangadhar Rao the adopted a child named Anand Rao who was the son of his cousin Vasudev Newalkar. He was renamed Damodar Rao on the day before he died.

This adoption was held in the presence of the British political officer. The British office had received a letter from the Raja requesting that the child should be treated with kindness and that the government of Jhansi should be given to his widow for her lifetime.

After the death of the Raja in November 1853, the British East India Company, under Governor-General Lord Dalhousie, applied the Doctrine of Lapse resulted in rejecting Damodar Rao’s claim to the throne. It happened because Damodar Rao was adopted.